Enjoy attractive tourist spots of Wakayama City as you like!
Located in the southern part of Kansai region, Wakayama City is easily accessible for foreign tourists, only 40 minutes by train or bus from Kansai International Airport, and also about one hour by train from Osaka. The city is blessed with beautiful sceneries of seashores and also historically interesting sightseeing spots since the ancient times. Strolling around the castle town and historical areas and experiencing the life of the people will give you an unforgettable memory of your travel. 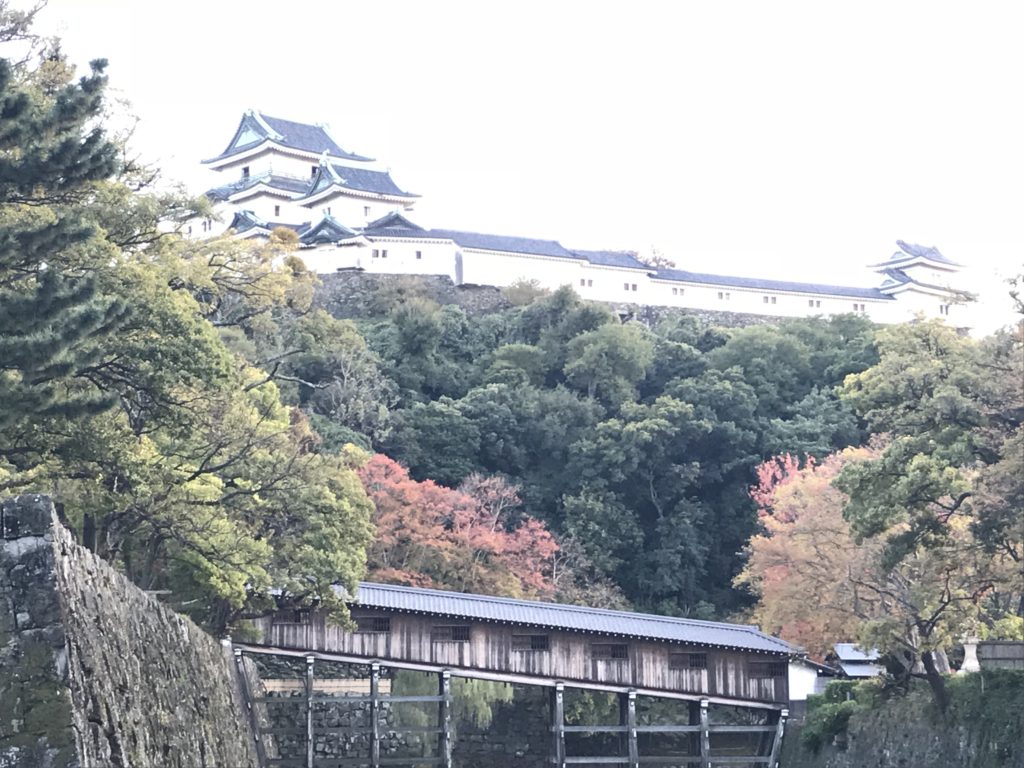 Wakayama Castle, a symbol of Wakayama city, is located on the top of Mt.
Torafusu at the center of Wakayama city. The graceful interconnected building
style is similar to that of Himeji Castle (UNESCO world heritage). It used
to be a national treasure, but unfortunately it was burned down to the
ground during the WWII. With the strong passion of the citizens of Wakayama,
the castle was reconstructed in 1958, by which the façade and the features
of the original castle have been restored again. You can enjoy a panoramic
view of Wakayama city from the main keep of the castle.
If you are lucky, you may come across Ninjas assisting visitors and may have a chance to take photos with them.
Also, you can experience the Japanese tea ceremony at the tea house in the beautiful Nishinomaru-Teien Garden located in Wakayama Castle Park. 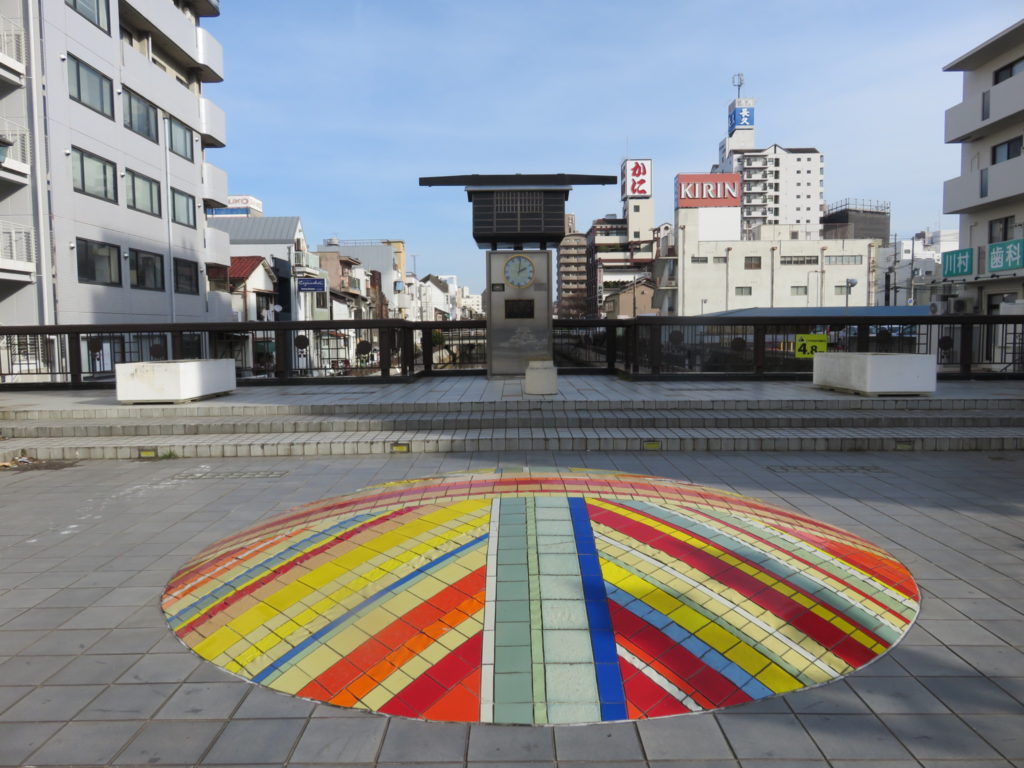 Wakayama Castle town has preserved several places associated with the people’s
life under the rule of the Kishu Tokugawa Family during the Edo period
(1603-1867) when the area prospered around the castle. Between the inner
and outer moats samurai warriors resided, and beyond the outer moat commercial
towns were stretched. By strolling through the present castle town, you
still can feel the life of the people in those days. 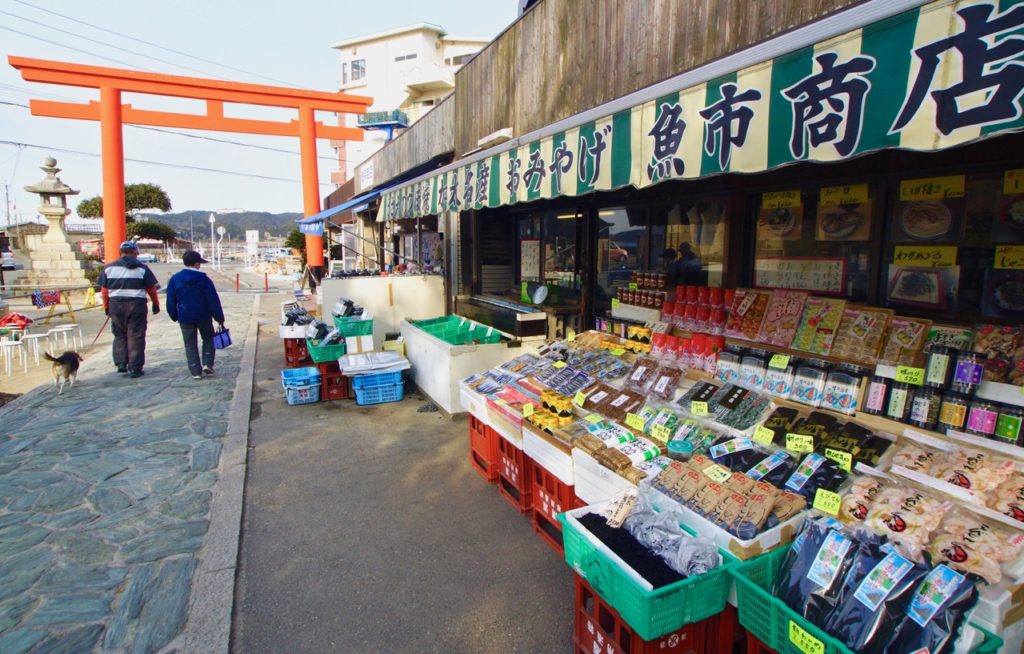 A small fishing town of Kada is located western edge of Wakayama City facing Seto Inland Sea (Setonaikai). This rustic town is well known for fresh seafood, clear water beaches, and Awashima-jinja Shrine.
In the precinct of the shrine, you find all kinds of old dolls which were
dedicated by people for forgiveness and absolution. Hina nagashi Festival
(the Hina Doll Floating Festival) is held here on March 3rd every year
to honor those dolls. 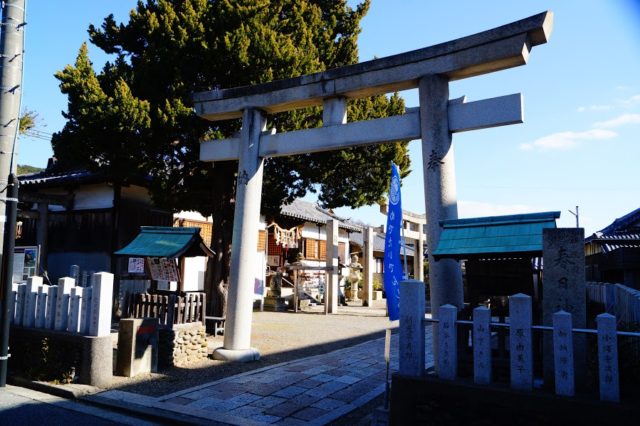 The main building of this shrine is designated as an important Cultural
Property of Japan, a typical building style of the Momoyama period (late
16th century). The detailed craftsmanship of its wood work is impressive.
The highlight event at this shrine is the Ebi Matsuri (Prawns Festival)
taken place on the 3rd Saturday in May, in which a procession of some 400
persons carrying portable shrines parades through the streets of Kada. 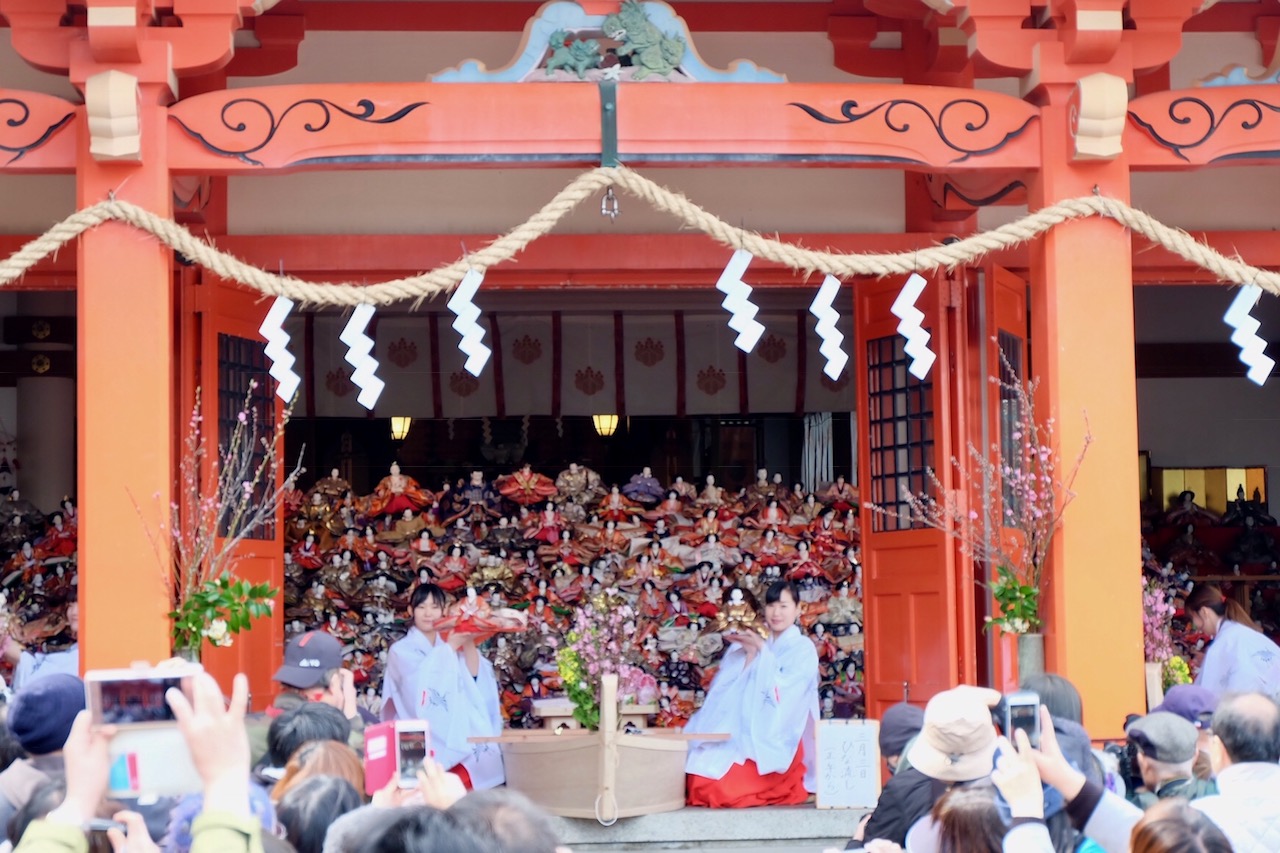 Awashima-jinja Shrine is famous for its annual ritual called Hina-nagashi
held on March 3rd in which dolls are set out to sea in boats. The shrine
is recognized as a deity of medicine and also a protector of expecting
women, and has drawn strong adoration since long ago from people, especially
women, asking the god to cure s their disorders and ensure the easy delivery.

During the Edo period, a small peninsula called Bandoko-no- Hana, or the
nose of Bandoko, served as a lookout post for the Kishu domain. From where
the lighthouse is now standing, this is one of the best spots in Wakayama
to enjoy spectacular sunset.

Saikazaki is a nostalgic fishing town located in the south-western part
of Wakayama City. It is a part of Wakaura region, which is designated as
Japan Heritage Site and has a breathtaking coastline. In Saikazaki, the
houses are lined up on the hill, which is sometimes compared to the southern
Italian coastline of Amalfi or Positano. 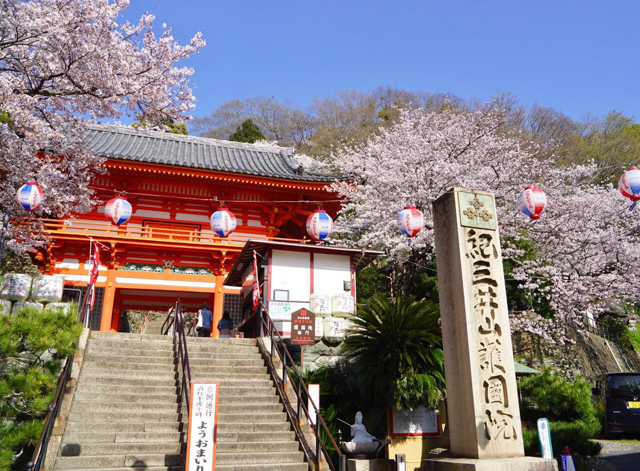 Kimiidera Temple, the second temple of the Saigoku pilgrimage route (the
33 Kannon pilgrimage temples in western Japan), was founded in 770. The
temple is well-known for the earliest blooming of cherry blossoms in Kansai
region. From the top of the long stairs leading to the the temple’s main
hall, you can enjoy a breath-taking view of Wakanoura. Wakanoura including
Kimiidera Tempele was designated as Japanese Heritage Site in 2017, “A
gold mine of artistic scenery, Wakanoura”. Since ancient times this area
has been recognized as the sacred place of Japanese poetry because many
people have been fascinated with its beauty and composed poems here. It
is also worth a visit to this temple to see the largest wooden standing
Buddha statue in Japan. 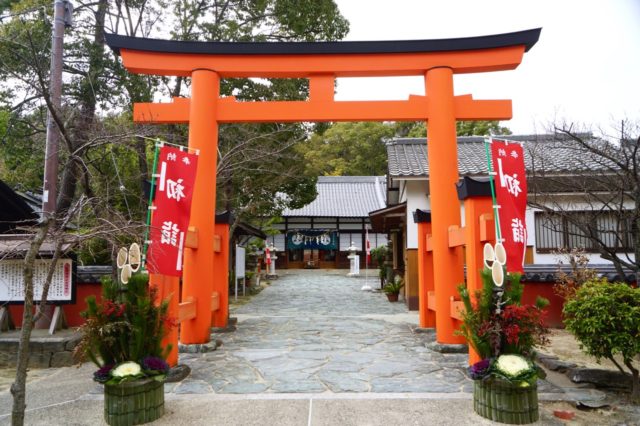 This shrine has drawn the faith from the imperial court and poets since
long time ago as the deity of waka poetry. The three main deities enshrined
here are Wakahirume-no-mikoto, Empress Jingu, and Sato-orihime. Also one
of the three Waka Poetry gods, Tamatsushima-myojin is worshiped here. You
can command a beautiful view of Wakanoura from Tengu-yama and Kagami-yama
both accessible from Tamatsushima-jinja’s grounds.

This pavilion was built by the first Lord of the Kishu Domain, Yorinobu
Tokugawa (1646-1652) as a wooden pavilion on the water, facing to Kimiidera
Temple on the other side of the shore. People in Edo period enjoyed the
beautiful view of Wakanoura and Kimiidera Temple from here. The present
pavilion is a reconstruction, since the original one was washed away due
to the typhoon in 1961, but you still can enjoy the beautiful scenery just
as people in the past used to enjoy. 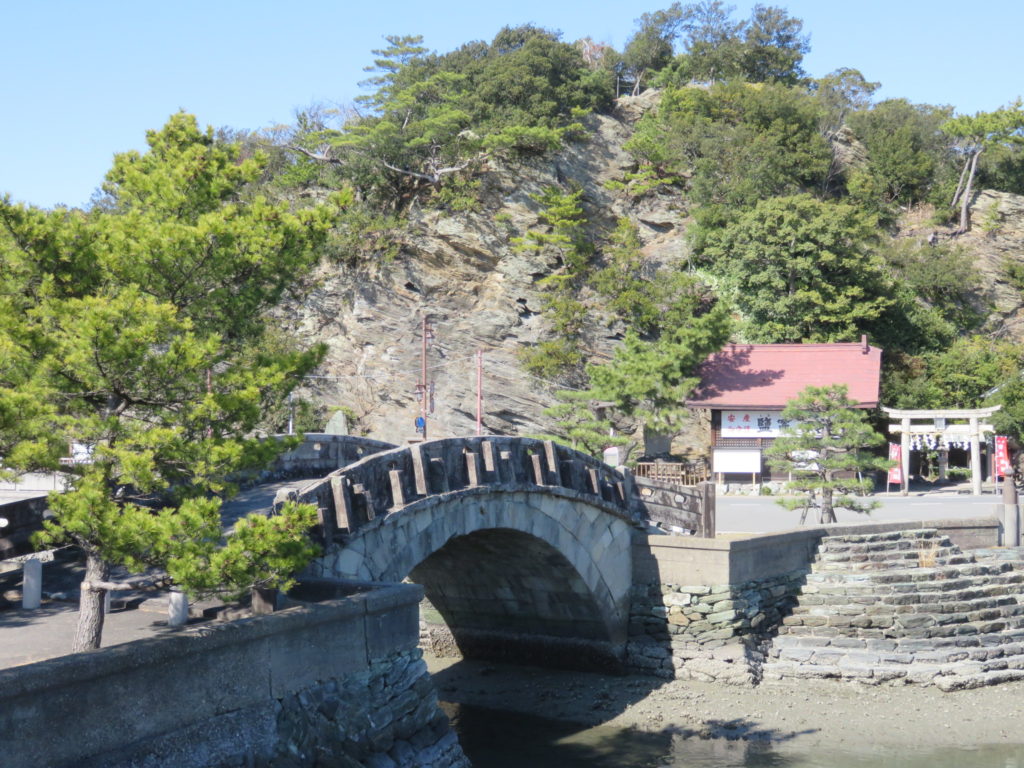 This stone arched bridge was built in 1851 by the order of Harutomi Tokugawa,
the 10th Lord of the Kishu Domain. 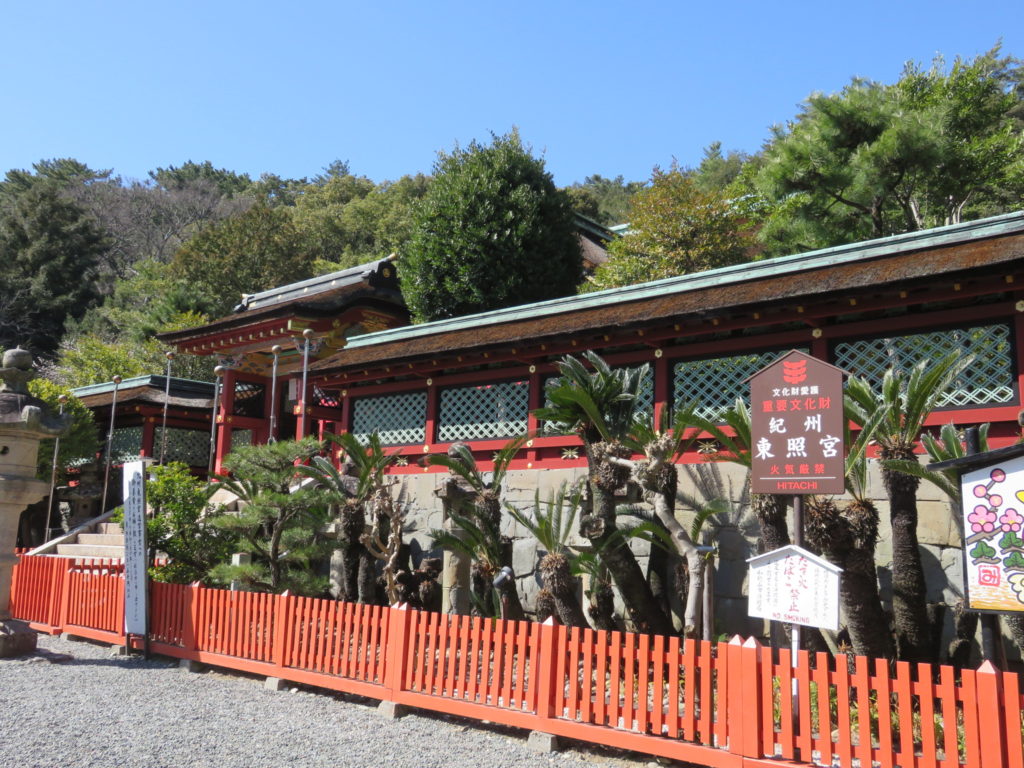 The main building of this shrine was constructed by the order of Yorinobu
Tokugawa, the first Lord of the Kishu Domain, in 1621. It is called the
“Nikko of the Kansai region”, for it resembles Nikko Toshogu Shrine of
UNESCO’s World Heritage Site in Tochigi Prefecture. 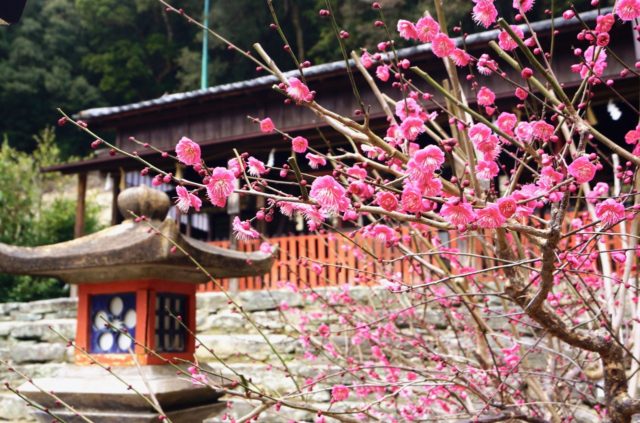 This shrine is dedicated to Michizane Sugawara, not only a scholar but
also a poet and a politician in the Heian period (794-1192). He became
a god of scholar after his death. Wakaura Tenmangu Shrine is one of the
three principle shrines in Japan to honor him. The main building was built
in 1604 at the request of Yoshinaga Asano, the Lord of the Kishu Domain
at the time. 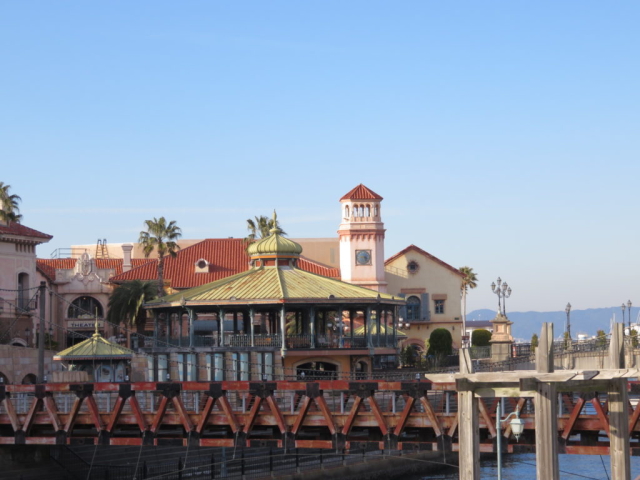 Wakayama Marina City offers a lot to see and do, including the Porto Europa theme park that resembles a Mediterranean port, and Kuroshio Ichiba Market where tuna cutting show is held every day. You can also taste fresh seafood at Japanese restaurants or barbecue corner. There’s Kuroshio Onsen right by Porto Europa, where you can experience bathing in onsen natural hot spring, if you like.
You can get the bus from JR station to Marina City. It takes about 40 minutes and costs 510 yen for one way. 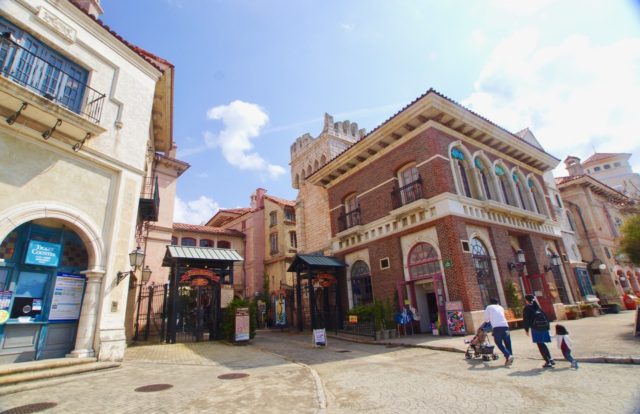 Porto Europa is a thema park inspired by port towns in medieal Europa.
There are many photo spots there. Admission is free, so you can stroll
and feel European taste. Porto Europa is one of the facilities in Wakayama
Marina City. 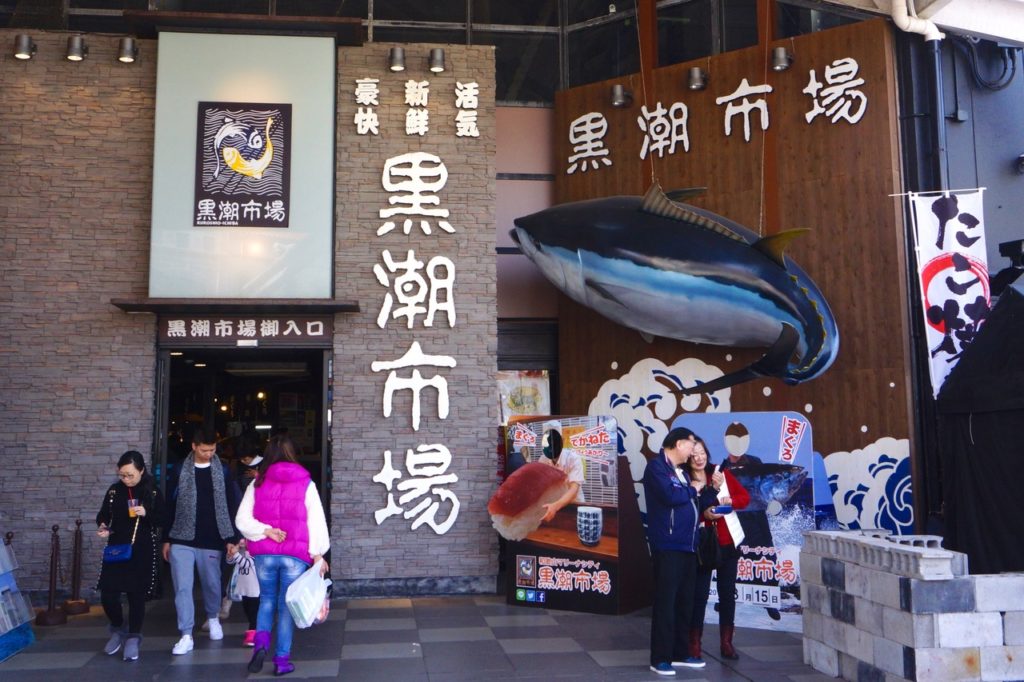 Wakayama is well known for its fresh seafood.
Kuroshio Ichiba is a fish market located in Wakayama Marina City. You can buy fresh seafood from Wakayama’s local waters and elsewhere in Japan at reasonable prices, and you can enjoy seafood barbecues and local foods at the market. Tuna cutting show is held three times a day in Kuroshio Ichiba. 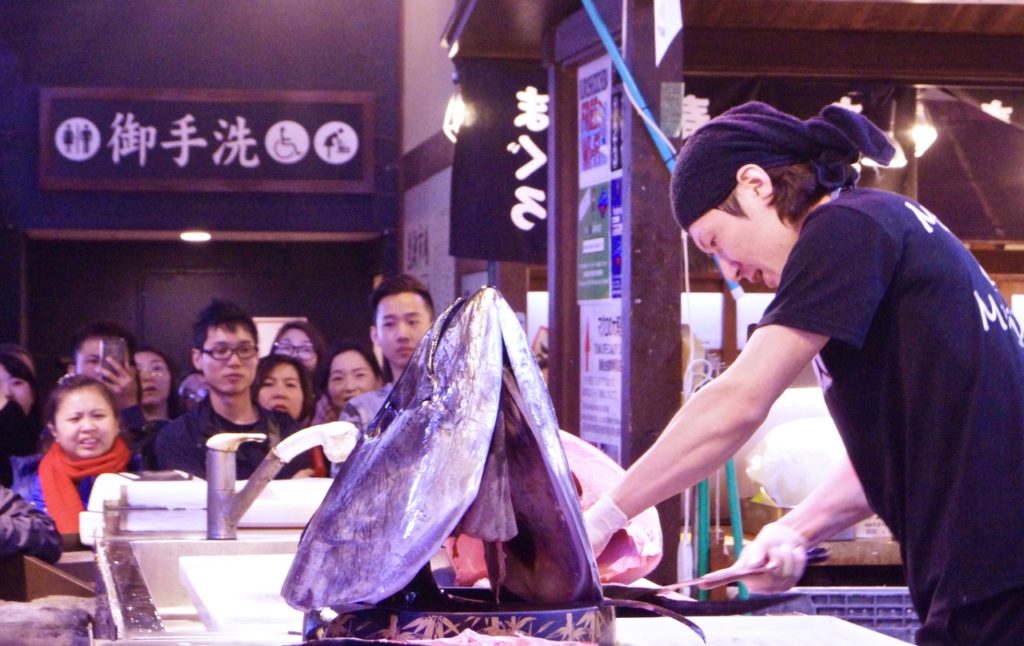 Tuna cutting show is held three times a day at Kuroshio Ichiba fish market. You can watch a tuna of nearly 100 kg being cut in pieces and prepared right in front of you. It’s worth watching!

Visit the Three Saigoku Shrines aboard on the Wakayama Electric Railway
Nichizengu Shrine (composed of Hinokuma-jingu Shrine and Kunikakasu-jingu Shrine) and Kamayama-jinja Shrine were formerly designated as Kanpei-taisha (first ranked state shrines), and Itakiso-jinja Shrine, a Kanpei-chusha shrine (middle-ranked state shrines).
It is a time-honored practice and considered one of the more prominent religious practices in Western Japan to visit these three shrines on a single trip. 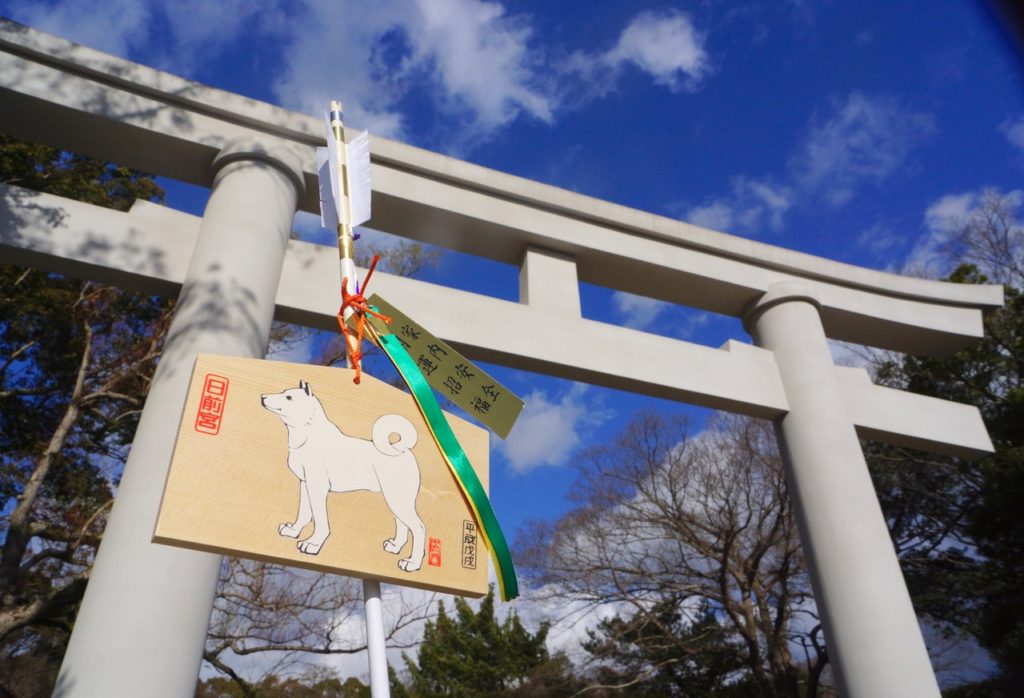 The main deity enshrined here is Hikoitsuse or Itsuse-no-mikoto, who is
believed to be the older brother of Emperor Jimmu, the first Emperor of
Japan in 600s BC according to the legend. Behind the main shrine is an
imperial mausoleum of Istuse-no-mikoto, who died in Wakayama after suffering
from an injury received in Yamato subjugation. It is located about 10 minute
train ride from JR Wakayama Station and 15 minute walk from the station
nearby called Kamayama.

The main deity enshrined here is Itakeru-no-mikoto, a God of Wood. The
legend in Japanese mythology says that he covered the whole country with
trees. This shrine is surrounded by lots of trees even today. The people
engaging in lumbering business often come to visit this shrine to pray
for the wealth of their business and their safety. It is also believed
that walking through a hole of a big truck of the cedar tree on display
inside the building will protect people against disasters and bad fortunes.
The area is also famous for bamboo plants. It is located 17 minute train
ride from JR Wakayama Station and 5 minute walk from the station nearby
called Idakiso. 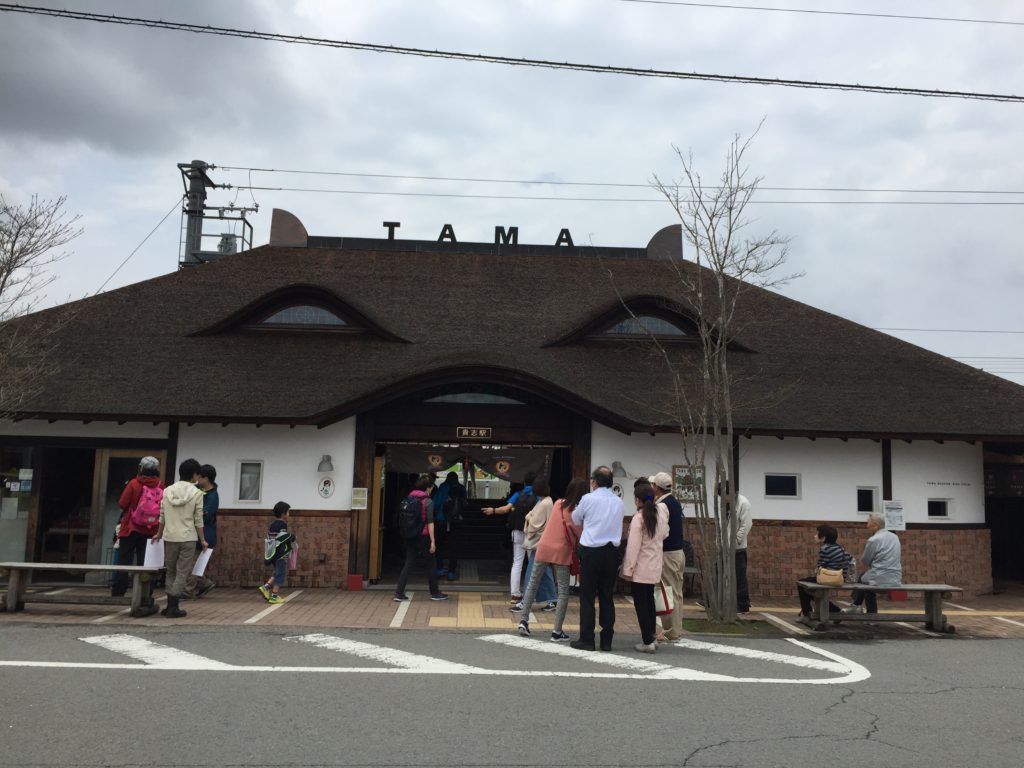 The last stop of Kishigawa Line of Wakayama Electric Railway is Kishi Station.
This is the only train station building in the world to have a roof made
of Japanese cypress bark, which has been a traditional building technique
in Japan being passed down over the ages. At Kishi Station, you can meet
“a cat” stationmaster called Tama. There is a café called Tama Café inside
the Kishi station building, where you can enjoy drinks and light meals
including gelato and juices made from locally grown ingredients. Tama welcomes
you!