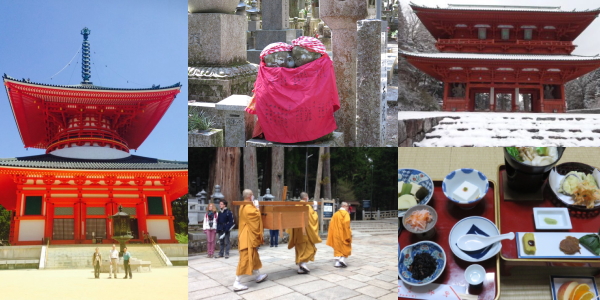 Koyasan or Mt. Koya is a well-known sacred site of esoteric Buddhism situated about 800m above sea level on a secluded mountain top in the northern Wakayama prefecture in Japan. Since its foundation in 816 by monk Kukai, more commonly known as Kobo Daishi, Koyasan has been the sacred place for study and ascetic practices of esoteric Buddhism by monks and also the most popular destination for milloins of pilgrims since ancient times. The Shikoku Pilgrimage to 88 temples is a popular pilgrimage attributed to Kukai (Kobo Daishi). It is customary that pilgrims come to Koyasan to pay respects with gratitude to the mausoleum of Kobo Daishi after completing their visits to 88 temples in Shikoku. Nowadays, Koyasan attracts a number of tourists from all over the world every year for its uniqueness of long history, location and atmosphere.
Geographically speaking, Koyasan is roughly divided into two parts, Danjo Garan and Okuno-in. The western part, Danjo Garan, is the first place where Kobo Daishi erected a temple atop Koyasan and now consists of historically important buildings and pagodas constructed by his disciples thereafter. In the central part of Koyasan stands Kongobuji Temple, the headquarters of Koyasan Shingon esoteric Buddhism. The eastern part, Okunoin, is the largest cemetery in Japan where more than 200,000 gravestones and monuments for people of all classes stand along the 2-km path among centuries-old soaring huge cedar trees. 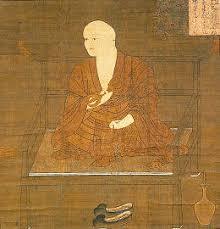 Kūkai was born in 774 in the present-day Zentsū-ji precincts on the island
of Shikoku. As a boy named “Mao” born in an aristocratic family, he studied
Chinese classics and Confucianism by his maternal uncle, a Confucian scholar.
At the age of 18, he is said to have entered the state university at the
then-capital Nagaoka but was soon disillusioned with the education of the
university where most of the graduates moved on to become bureaucrats.
He dropped out of the university to devote himself to various forms of
esoteric practices in the natural setting of the mountains. In the meantime,
Kūkai was introduced to an esoteric meditative practice called the Kokûzôgumonji-ho
which involved the recitation of a mantra a million times in 100 days and
was supposed to endow the practitioner with miraculous powers of memory
and understanding. A few years later at the age of 24, Kukai wrote Sango-shiiki
(Indications to the Three Teachings), a work in which he attempts to reveal
the superiority of Buddhism by evaluating the respective contributions
of Confucianism, Taoism, and Buddhism.
Despite his recognition of the superiority of Buddhism, Kukai was not satisfied with the traditional sects represented by the Nara schools, which he had studied. It appears that between the ages of 24 and 31, he wandered through its various mountains and sacred sites, practicing asceticism as a private mendicant monk. During this period, Kūkai happened to encounter the Mahavairocana sūtra but as Kūkai could find no one who could elucidate the text for him, he resolved to go to China to study the text there.
In April 804, he set out for China in the company of the ambassador to the T’ang court, Fujiwara-no Kadonomaro. He travelled to Chang-an (=present X’ian), the capital of the T’ang dynasty. During his sojourn for about 2 years, he studied Indian Buddhism, Hindu teachings, and Sanskrit with two Indian monks. But more significantly, he met Master Huiguo (746-805), the seventh patriarch of Chen-yen (=Shingon) Buddhism at Qinglong Monastery in Chang-an. Whereas Kūkai had expected to spend 20 years studying in China, he received the final initiation, surprisingly, in a few short months and then became the 8th patriarch of the Chen-en esoteric lineage combining Vajraśekhara Sûtra with Mahâvairocana Sûtra.
Kûkai returned to Japan in 806 at the age of 33. He arrived in Kyushu with a voluminous amount of sûtras, collections of mandala paintings, books, ritual paraphernalia and etc. However, he was not permitted to enter the capital due to political unrest and was obliged to remain in Kyushu for another three years. In 809, the new Emperor Saga ordered Kûkai to move to the new capital of Kyoto to reside at Takaosan-ji, the center of the Kyoto Buddhist world. Under the patronage of Emperor Saga, Kûkai was appointed over the years to various administrative positions of several important official temples. This allowed him to perform a various forms of esoteric ceremonies, hence gaining official recognition for the efficacy of esoteric Buddhism and preparing the rise of Buddhism as an ideological force in medieval Japan.
In 816, after obtaining sanction from Emperor Saga, Kûkai began building a monastic center in Mt. Kôya, and there he passed away in 835 at the age of 62. In 921, he posthumously received from Emperor Daigo, the honorific title, “Kôbô Daishi “ (=“Great Teacher Who Spread the Dharma”). He is also renowned for his excellent talents as a teacher, civil engineer, poet, calligrapher and etc. Kobo Daishi is one of Japan’s most famous Buddhist saints beloved by the people regardless of sectarian differences. Among the followers of Shingon sect of Buddhism, Kobo Daishi is still believed to have not just died but entered into an eternal meditation for salvation of people.

Kongobuji (Diamond Peak Temple) is the head temple of Koyasan Shingon sect of Buddhism that administers about 3,600 sub-temples all over Japan. It contains beautiful sliding screen paintings and Japan’s largest rock garden, Banryutei. 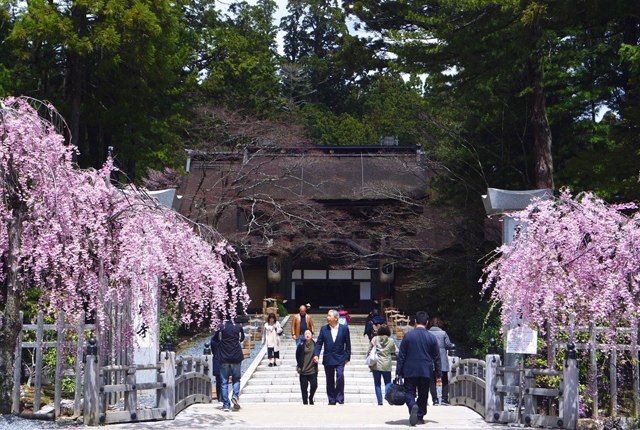 Entrance to Kongobuji Temple in spring

Danjo Garan is found on the eastern part of Koyasan where a number of
temples and pagodas stand closely. Danjo (rostrum) refers to the rostrum
occupied by Dainichi Nyorai, the Great Buddha of Universal Illumination,
the Principal Buddha of Shingon teachings, and to the monastic complex
there. The name Garan derives from Sanskrit meaning a quiet and secluded
place where Buddhist monks may train. 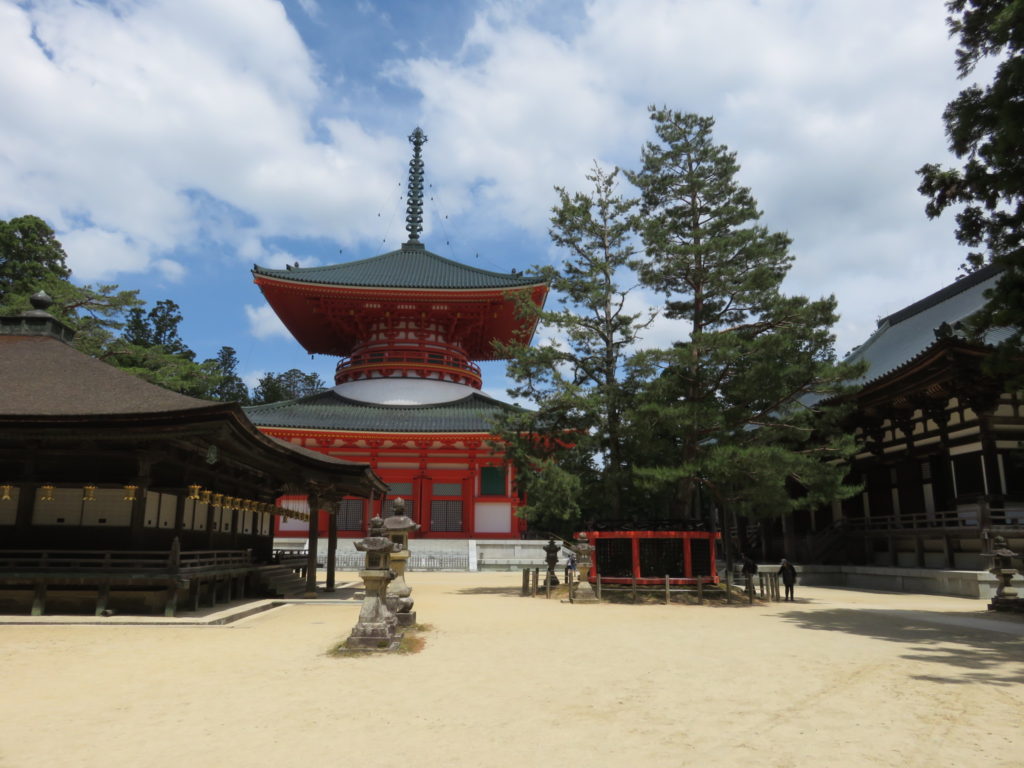 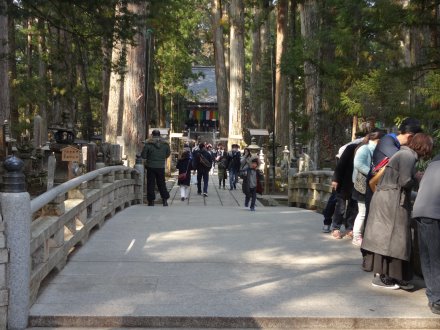 Okuno-in is the largest cemetery in Japan surrounded by huge ancient Japanese cedars. From the entrance at First Bridge (Ichino-hashi), over Middle Briddle (Nakano-hashi) and on to Kobo Daishi’s mausoleum runs a road approximately 2 km long.  An awesome religious aura hangs in the air around the countless tombstones built for the faithful who wish to be near the great Kobo Daishi. There, you will be able to see a concise history of Samurai Japan as the graves and memorials of well-known Samurai feudal lords are standing all along the road.

At the end of Okuno-in, there is the Hall of Lanterns (Toro-do).  Inside the dark hall several thousand lanterns shine with mysterious beauty. Behind the hall, the Mausoleum of Kobo Daishi stands quietly in the middle of a great forest of thousand year-old Japanese cedars. 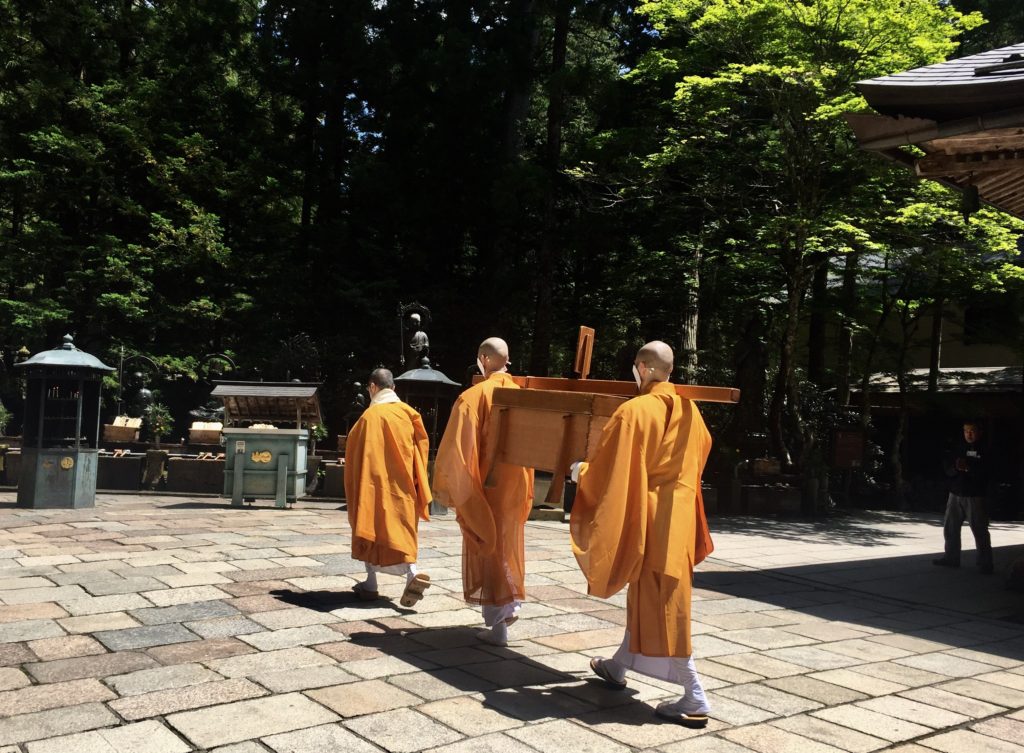 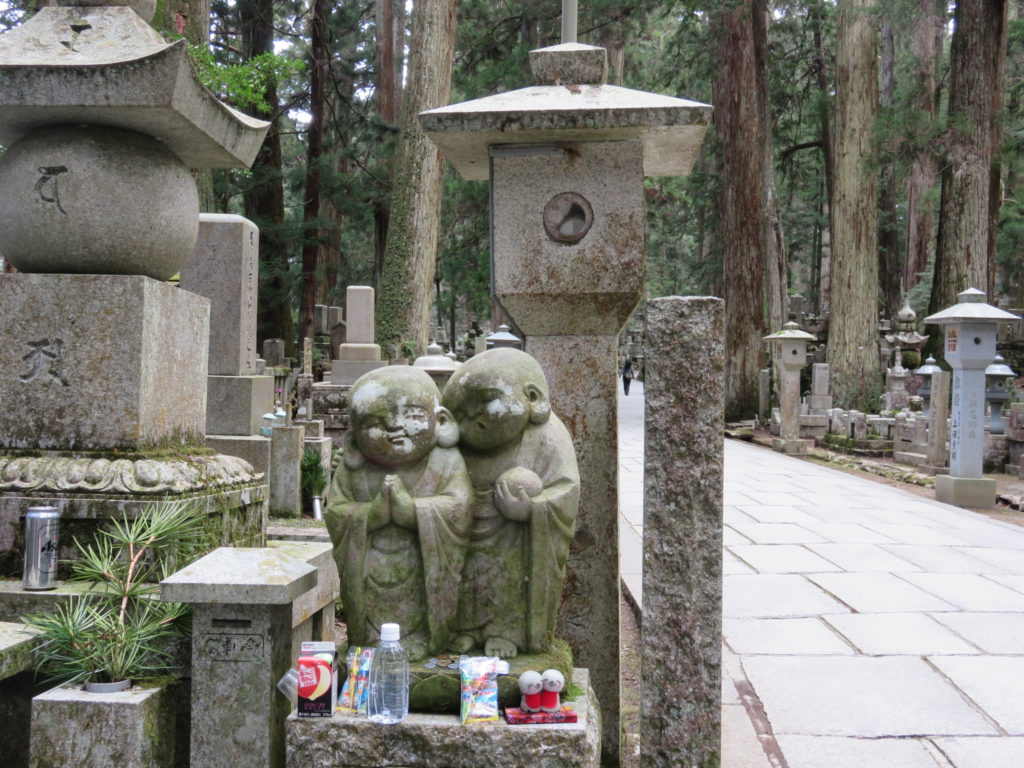 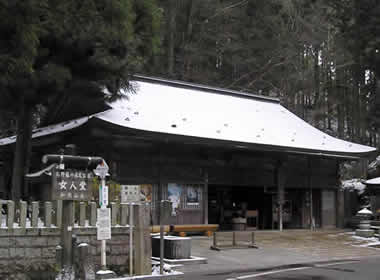 Women were banned from stepping into the strict ascetic training ground
of Koyasan since its foundation up to 1872. However, due to the fervent
desire of female pilgrims to be even a little closer to the Pure Land of
Koya, Nyonin-michi (Women’s path) encircling the precincts of Koyasan was
created over years. There were 7 routes leading to Koyasan and a Nyonindo
was constructed at each entrance. Today, only one Nyonindo remains at the
Fudozaka entrance. 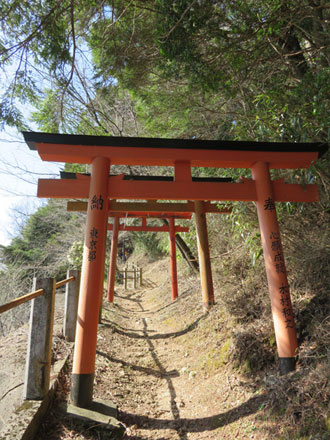 A rather steep hill path stretches from Nyonindo to Daimon. This is the
first part of Nyonin-michi (Women’s path). At the top of the hill, there
is a small shrine dedicated to the deity Benten. From Daimon side, the
hill path passes through the line of red Torii archways and the Great Pagoda
is visible at about half-way.